News: Will Hill signs for 3 more books with HarperCollins! 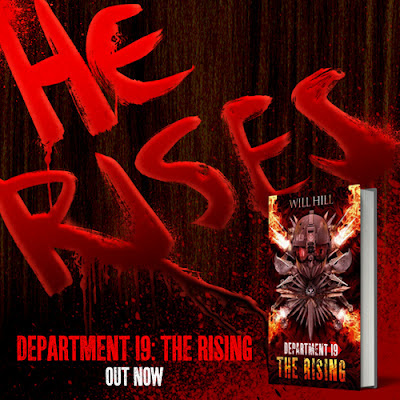 I am a massive fan of Will Hill and his Department 19 series, so this press release sent to me today from the lovely Rosi at HarperCollins has me bouncing with excitement! So there'll be five books in the series and a stand alone YA from the man himself. Excellent! Check out the release for yourself...

HarperCollins is delighted to be continuing its relationship with YA author Will Hill by acquiring three new titles. Fiction Editorial Director Nick Lake secured UK & Commonwealth rights to two final books in the Department 19 series, plus one untitled YA novel. The deal was concluded by Nick and Charlie Campbell at Ed Victor Ltd.

First launched by HarperCollins in 2011, Department 19 was the number one bestselling YA hardback debut of the year and the series has acquired more than 7,000 fans on Facebook (www.facebook.com/department19exists). The books have also enjoyed sales success as ebooks, with Department 19: The Rising becoming HarperCollins' bestselling children's ebook launch in April. Hill’s writing has also been acclaimed in the press. "High action, fast plot, original and gripping, this is vampire writing without the sparkle – but with lots of blood!" said the Sun, while the Telegraph pronounced that, “Bram Stoker can stop turning in his grave: his 21st-century legacy extends beyond Twilight.”

Nick Lake said: "Will Hill is an incredible talent and we’re tremendously excited to have these new books to look forward to. With The Rising, he achieved that rare feat - a sequel that is richer and more gripping than its predecessor - and the strength of his writing is certain to garner him many, many more fans over the coming years."

Will himself said: "I'm absolutely delighted to have signed with HarperCollins for three more novels - the experience of publishing the Department 19 books with them has been an absolute pleasure. I'm looking forward to continuing to work with my amazing editor Nick and the fantastic sales, marketing and publicity teams, and I'm so thrilled that the Department 19 series will finish where it started; on the best list in the business."