Okay, so. It's a new day, and a new month!!! It's been a few weeks since I did my last (and first...) Letterbox Love post. I've been meaning to do it weekly but things have been quite busy my end recently, hence the silence around here. For the first time in 7 weeks, I have a weekend off! Yay! So I'm able to update this! I also have the next week off and I'm going to attempt to get out of this reading slump I'm currently in, and get some reading done and maybe even a review or two written!

Anyway, I will apologise to start, if I have missed any books out. I tried to find them all but sometimes they hide! If I find any that weren't included, I'll try and get them included in a post later on! 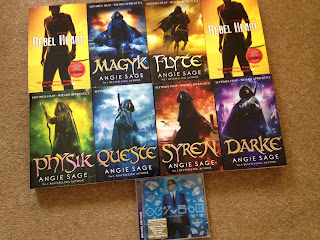 Rebel Heart by Moira Young (Eeep! Sequel to Blood Red Road!! So excited!)
Magyk, Flyte, Physik, Queste, Syren and Darke by Angie Sage (Ooh! Read the first one ages ago and loved it and these new covers are awesome!!! Very shiny!) 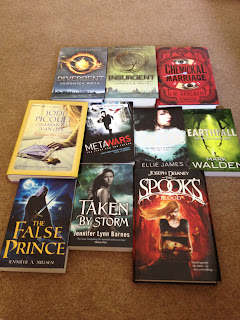 Divergent and Insurgent by Veronica Roth (US hardbacks... Could not resist!).
The Chemickal Marriage by G.W. Dahlquist.
Between the Lines by Jodi Picoult and Samantha Van Leer.
Metawars by Jeff Norton.
Shattered Dreams by Ellie James.
Earthfall by Mark Walden.
The False Prince by Jennifer A. Nielsen.
Taken By Storm by Jennifer Lynn Barnes.
The Spook's Blood by Joseph Delaney. 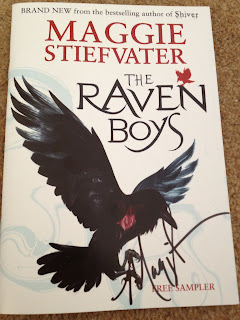 Signed sampler of The Raven Boys by Maggie Stiefvater.
I'm looking forward to this one. I'll admit to being disappointed by The Scorpio Races so really hoping I like this. Haven't had a chance to read the sampler yet, but I am loving the cover!

Thanks to all the awesome publisicts and publishers! Including, Bloomsbury, Scholastic, Puffin, Quercus, Random House, Orchard and Hodder. You guys rock!