Cover for The Casual Vacancy!!!!!

Finally after months of waiting, the cover art for the new J.K. Rowling book has been released. We already know it's called The Casual Vacancy, and if you don't, where have you been living? Under a rock or something? It's out on 27th September and I for one am very excited. The cover was released just a mere half an hour ago and looks like this: 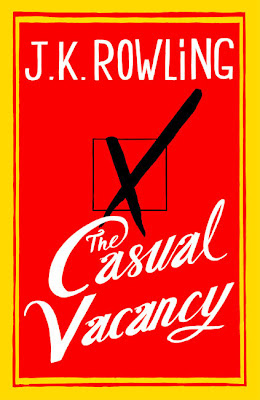 I'll be honest. Not loving it. But I am not hating it either. It's underwhelming to say the least, and totally not what I was expecting. The red and yellow kind of makes my eyes hurt after a bit (good job I always take dustjackets off whilst reading a book, right?!). It's so boring. But then, it's an adult book, and adult books are often a more low-key affair. I do like that it looks a little like a ballot paper, obviously meant to parallel the subject of the book. It's just... I don't know! Maybe it'll be a grower - a cover that you'll come to love?

As well as the cover, Little Brown have announced that the book will weigh in at a hefty 512 pages! Sweet! And they also revealed that in their origional announcement of the title and blurb, they got poor old Barry's surname wrong. It was announced as Fairweather, but is actually Fairbrother! Whoops!

Either way, regardless of what the book looks like, I can't wait to read it! Bring it on!