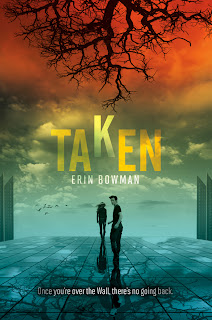 Official synopsis: "There are no men in Claysoot. There are boys—but every one of them vanishes at midnight on his eighteenth birthday. The ground shakes, the wind howls, a blinding light descends…and he’s gone. They call it the Heist. Gray Weathersby’s eighteenth birthday is mere months away, and he’s prepared to meet his fate–until he finds a strange note from his mother and starts to question everything he’s been raised to accept: the Council leaders and their obvious secrets. The Heist itself. And what lies beyond the Wall that surrounds Claysoot–a structure that no one can cross and survive. Climbing the Wall is suicide, but what comes after the Heist could be worse. Should he sit back and wait to be taken–or risk everything on the hope of the other side?"

If ever there is a book that is just screaming out to be made into an action-packed, Hollywood blockbuster, then here it is. Taken is a heart-pounding, nerve-racking, mind blowing roller-coaster of emotions, action, battles and a kiss or two.

At present, this book does not have a UK publisher (something that needs to change right this instant) and I was lucky enough to get an eARC for my Kindle thanks to the awesome Harper US team on Edelweiss and I was so so so excited to read it. I did hold off a little but but the temptation finally got the better of me and I just had to start it.

And boy did I fall head over heels for this book. The writing is so clear, so crisp and so engaging that I was right there in Claysoot with Gray, Blaine and co as they prepared for Blaine's heist. Blaine is Gray's older brother, and we meet them on Blaine's eighteenth birthday. Everyone knows that all the boys are heisted when they turn eighteen. Nothing can stop it. No one knows where they go. No one knows what happens to them or if they live beyond the heist itself. It is just one of life's mysteries. But soon after Blaine is gone, questions start to spring up in Gray's mind, a year younger than his brother, he is tired of waiting. He wants answers. And Gray doesn't have the patience to sit around and wait for the answers to come to him - he's impulsive and goes to the answers himself. But that means climbing the Wall. Everyone that has ever done it before has died. But when Gray finds out that all is not as it seems and that he has missed his own heist, can he survive beyond the confines of the wall as well?

I'm going to say it. I love Gray. He is just... GAH! Amazing. He's impulsive, rash, dark and brooding. He's just a brilliant, brilliant main character, main protagonist. His voice is so right and guides you smoothly through the world in which the characters live in. I don't want to give much away but this book is so twisty and tightly wound that anything I could say could give things away...

Everything about Taken is so vivid. From the stunning cover you can see above, to the imagery and the contrast between Claysoot and Taem (wait till you get to Taem...) and the two completely different worlds in which they live was fascinating. I'd find myself querying my own mind. Wait... a minute ago they were all using bows and arrows and didn't have electricity... and now there are light bulbs .. huge screens... guns... Oh... yeah! Duh, did you not just read that last bit... As you were. It's just so cool and something that made this a fun read as well.

Something that has struck me is that there are few books that fall under the dystopian genre that are narrated by a guy... And this was refreshing. In a world of Katniss, Triss and co, we needed a Gray in there to shake things up, throw something new into the mix, and thankfully Taken has answered our prayers.

The other characters besides the swoon-worthy Gray are well balanced too. Emma - Gray feels for her but doesn't want to get too close, a result of the way life is back in Claysoot, he doesn't want to have to leave. Blaine - the big brother who is always looking out for his kid brother, making sure he is okay over himself. And Bree - the rebel who Gray is drawn to.

Full of sacrifice, heartache, questions that demand answers - I just cannot explain just how much I love this book. Like I am already having withdrawal symptoms and I didn't finish the book even an hour ago! I need Book Two now. Like right now. I need to see what happens next. I just need it for my sanity. 2014 is a very, very long way away. I might just go into hibernation... That sounds like a very good plan to me!

Just get this book, at any and all costs - you will not be disappointed!