The last Vampirates book, Immortal War was published in 2011 - it's hard to believe that 2 years have passed so fast! And now Justin Somper is gearing up for the start of a new saga. Enemies of the Prince is the name of the new series, and it's being published by Little Brown. In hardback! Eep. I always wanted hardback editions of the Vampirates books but the UK publisher released them all exclusively in paperback so no such luck there, but I am so excited we get this new series in hardback.

Book One is called Allies and Assassins and it is out on 5th September. I cannot wait! I love the cover which was officially unveiled earlier today!! Kind of has a Brent Weeks sort of feel to it! Will definitely look eye-catching in hardback! 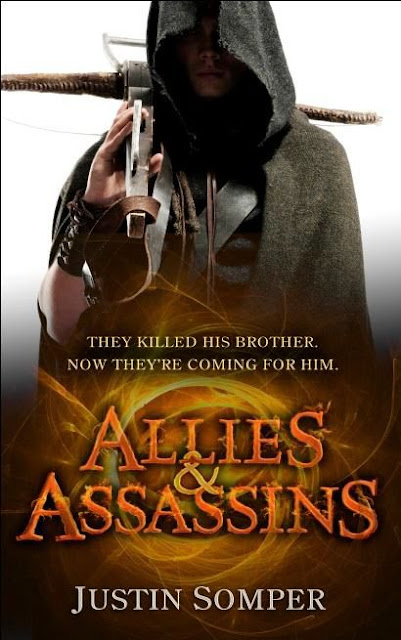 "A stunning new crossover fantasy from the bestselling author of Vampirates
They killed his brother. Now they're coming for him. . .
As the second prince of Archenfield, Jared never asked to be more than the spare. But behind the walls of the castle is a dark and dangerous court where murder and intrigue are never far below the surface.
Now his older brother is dead. The kingdom is his. And the target is on his back. Can he find the assassin before the assassin finds him?"