Who Could That Be At This Hour? by Lemony Snicket [Review] 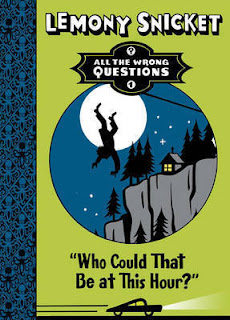 Official synopsis: "In a fading town, far from anyone he knew or trusted, a young Lemony Snicket began his apprenticeship in an organization nobody knows about. He started by asking questions that shouldn't have been on his mind. Now he has written an account that should not be published, in four volumes that shouldn't be read. This is the first volume."

Several years ago now, I was a massive fan of the A Series of Unfortunate Events series by Lemony Snicket. There was an air of mystery about them. This sense of fun and I couldn't wait to read the next instalment. Although, for myself, the series ended somewhat disappointingly, the news that there was a new series coming from Snicket excited me all these years later.

I'd been quite excited to be honest, but when I actually got the book and read it it was kind of a mixed experience. It was nice to be thrown into complete mystery again but now aged 21, I found it a tad off... Almost boring. The fact that so little happens in the book and the actual way it is written actually annoyed me slightly. I'm finding it hard to say what I actually want to - I don't know how to say it.

I shall read the second book. I can't not. Who know's... maybe it'll be the turning point in the series for me and I'll love it. I didn't dislike this book - I just didn't love it. One thing is for sure though, the Snicket quirkiness is still there so it felt familiar and was just what I needed at the time of reading.
Posted by Ryan at 21:32

Labels: 2012, Lemony Snicket, Reviews, Who Could That Be At This Hour