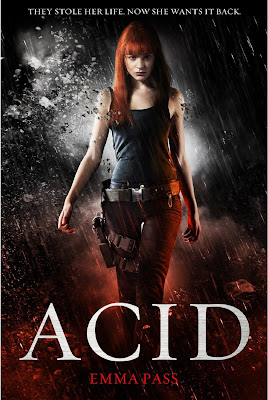 Official synopsis: "2113. In Jenna Strong’s world, ACID – the most brutal, controlling police force in history – rule supreme. No throwaway comment or muttered dissent goes unnoticed – or unpunished. And it was ACID agents who locked Jenna away for life, for a bloody crime she struggles to remember. The only female inmate in a violent high-security prison, Jenna has learned to survive by any means necessary. And when a mysterious rebel group breaks her out, she must use her strength, speed and skill to stay one step ahead of ACID – and to uncover the truth about what really happened on that dark night two years ago."

Sometimes a book really, really surprises you. You look forward to it for well over a year and then you get to hold it, finally, in your grubby little hands, knowing that you can devour every last page and no one can stop you. You fully expect to enjoy it, like it, love it even, but then sometimes, something magical happens. You don't love it. You adore it. You worship it even. That, ladies and gentlemen, is what happened to me when I read this book. ACID by Emma Pass.

Announced by publisher, Random House, way way WAY back in late 2011, excitement has been bubbling away and steadily increasing for ACID. A dystopian with an unmistakable British feel. Yes, it's set in the UK... or should I say the Independent Republic of Britain, rather? It makes a nice change to read something like this and it not be set in America. In a world of Hunger Games and Divergents which are obviously set in America/Panem, it's refreshing and really helps ACID to stand out in the crowd. That and the fact that it is freaking awesome!

ACID is a stunning and unmistakable British dystopian debut that stands out from the crowd and wows. Right from the start it's action packed. It's so cinematic - honestly it would be perfect for a Hollywood adaptation, or a mini-series on TV or something. It's just so beautiful and full of great imagery that really gets to you deep inside your head. You can imagine it so well - such is the quality of Pass' writing.

Firing on all cylinders  Jenna Strong is determined to get away from ACID, the over-baring, manipulating and brainwashing, horrific police force that rule the country in a grip stronger than iron - they control everything. Who you marry, when you can and children and even if it will be a boy or a girl! They control if you can have a job, and where. It's illegal to do so many things - freedom has well and truly been taken away from the people. And while ACID may want people to look like they're good, helping their country to regain some sense of prosperity, they are far darker and evil that can first be antipated. They have a slight liking of brainwashing, or as they call it, cognitive realignment with some devastating effects.

Written in first person, you really get a grip on the world encased within that gorgeous, striking cover. There are twists and turns that will leave you reeling, gasping "NO! NO NO NO NO NO! THAT CANNOT HAPPEN... THAT DID NOT JUST HAPPEN... NOOOOO!" and still have you begging for more, continuing on until the very end before you even realise it. And the ending. Gah. Just such a good ending that brings with it some closure, is satisfying and yet still leaves you demanding a sequel... There's more... Please Emma... Tell me there's more!!!

At the start of the book, Jenna is in Mileway. An all male prison - she is the lone female in the prison but her crime was so bad that she deserves to be there in ACID's eyes... She killed her parents. With the help of a relative stranger, Jenna breaks out of prison and goes on the run, her life in more danger than it ever has been before and this takes her further than she is used to. From London she travels to Newcastle, with a little trip to Manchester along the way too but the less I say about that now, the more you'll be "OMG"-ing when you read it...

Because you're going to read it. Right? You have to. It's not a suggestion! I honestly cannot stress enough just how much people need to get this book now and read it straight away. Now. It's so well written, so well thought out, and so well executed that it's instantly become a firm favourite of mine and I cannot wait to see what Emma does next. I've gushed like a right little fangirl all week to Emma on twitter and every chance I've had I've told people they just need to read this book - no matter what! The little taster for Fearless, Emma's next book, out next year, already has me salivating at the mouth just dying to read it!

Thanks to Random House for my review copy. You guys are awesome! And thanks Emma! You got me out of a little reading funk there and really shook things up! My Top 10 of 2013 is going to be a toughie this year... So many stunning reads already! ARGH!

Buy from Amazon UK
Buy from the Book Depository
Posted by Ryan at 16:30