In My Mailbox idea from Kristi @ The Story Siren, and all links take you to Amazon UK

Hey everyone. Hope you are all well and enjoying your weekend! Here are the books I've revieved/bought in the last 2 weeks (or is it 3 now? I'm losing count...) since the last In My Postbox! :D


(N.B. I noticed a little too late that two books in here - Geekhood and Hollow Pike have already been featured, when I thought they hadn't... Oops...) 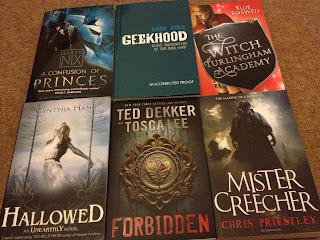 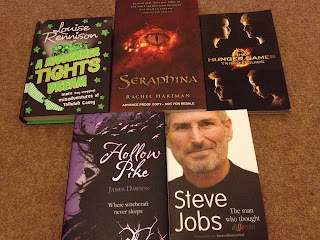 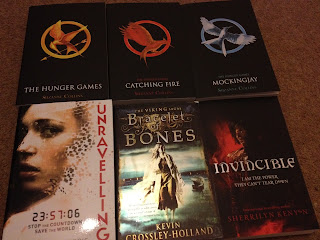 A Confusion of Princes by Gath Nix (so excited for this one - it sounds great and I am in love with the cover!!!!)
The Witch of Turlingham Academy by Ellie Boswell.
Hallowed by Cynthia Hand.
Forbidden by Ted Dekker.
Mr. Creecher by Chris Priestley.
A Midsummer Tights Dream by Louise Rennison.
Seraphina by Rachel Hartman (A LOT of buzz about this one over on Twitter. Hadn't heard of it till I got this ARC but it sounds awesome and I cannot wait to give it a go!
Steve Jobs: The Man Who Thought Different by Karen Blumenthal.
Unravelling by Elizabeth Norris (another one I am very excited about!)
Bracelet of Bones by Kevin Crossley-Holland.
Invincible by Sherrilyn Kenyon.

And finally something special! :D A book I have been waiting for since it was announced in December 2010... 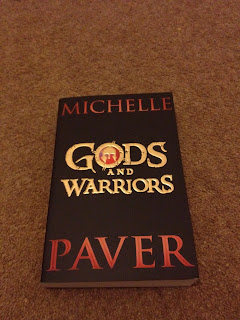 Gods And Warriors by Michelle Paver!

ARGH! YES! YES! JUST YES! It's real. It actually exists. It's no longer just a distant hope. It's a book and it's here! 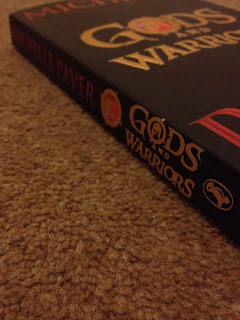 It's not actually published until 28th August, but I've already read it and good grief is it amazing! Michelle Paver is back, ladies and gentlemen, boys and girls, with a colossal bang. I really cannot wait to see what  happens next. I have to give a special shout out and thank you to Rhys over at http://www.thirstforfiction.com/ for making this happen! He's awesome and you should all go check out his brilliant blog!

The book itself is signed, and me and Michelle go way back (met her the first time in 2006 and speak to her via letter and as I'm a moderator on her official website (www.jointheclan.com) and so the message makes me feel all jumpy and happy. I would share it, but I've decided that I don't want to show books that have been signed when there's a message specifically to me. I spoke to fellow bloggers about this on Twitter and feel it's personal and, I suppose selfishly, I want to keep it for me! Haha. I know it sounds dumb but hey, ho, that's how it goes!

The Hunger Games: The Tribute Guide - Read this, and might review it. It's basically just a load of pictures and a little bit of text, which rather than being a guide to the tributes themselves, is more of an abridged version of the book itself from Reaping to entering the arena for the Games themselves. Good, and a nice little collectable for die-hard fans, but not really anything to make a big song and dance about sadly!

The Hunger Games, Catching Fire and Mockingjay by Suzanne Collins. The adult UK editions. Black with the birds from the original US covers. Love these so freaking much and despite having the UK original paperbacks, US hardbacks and the e-books on my Kindle, these were on The Works for £1.99 but if bought all together, it came to £4.99. I'm sorry but that is a bargain I could not pass up on. They look so impressive all lined up. :D LOVE IT!
Posted by Ryan at 14:41