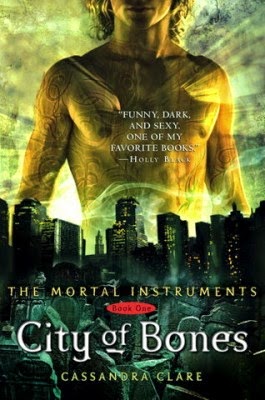 Official synopsis: "Sixteen-year-old Clary Fray is an ordinary teenager, who likes hanging out in Brooklyn with her friends. But everything changes the night she witnesses a murder, committed by a group of teens armed with medieval weaponry. The murderous group are Shadowhunters, secret warriors dedicated to driving demons out of this dimension and back into their own. Drawn inexorably into a terrifying world, Clary slowly begins to learn the truth about her family - and the battle for the fate of the world."

I have to begin by saying that when I sat down to start reading this book I definitely had my doubts. I'm obviously a latecomer to the series, this book was published 7 years ago this Summer, so it's had it's time to build up a massive audience and devoted following as well as a bucket load of hype. The film even came out last year adding the the hype, and hype as I said in my review for We Were Liars by E. Lockhart can be a very funny thing. It can go one of two ways. It can be undeniably justified and on the other hand it can be totally misplaced and un-warranted. But with City of Bones the hype is so so so justified. In fact, once I started to read the book I had to beg myself to try and explain to myself just why I left it so damn long to pick this book up!

I've actually owned a copy of the book for well over a year now. I bought a lovely boxset of the US hard covers from America. It had the first five books of the series in it and they are all stunning to look at but for one reason or another I just never picked the books up and actually started to read. And I have to say I wish I had done it so much sooner because once I actually started reading City of Bones I well and truly fell in love. With the world, with the characters, with Manhattan, with Jace. I just fell head over heels for this book as it reeled me in to a world of Shadowhunters and demons and vampires and warlocks and Magnus and werewolves and so so so much more. In fact I don't think there wasn't a single page went by where there wasn't something that I picked up on that I loved.

Cassandra's writing style is also brilliant. It's so well written, so fluid that it hardly requires any effort on the readers part to follow the story as Clary tries to find out why her mother was taken and where she has been taken to. Everything is described in crystal clear clarity and it's so mesmerising I'd find myself fighting to come up for air between chapters, I just wanted to keep reading and not stop, regardless of the fact that I actually had work to go to which was pretty darn annoying! It's just one of those books that is truly and irresistibly un-putdownable.

The characters are also just as lovable as the book itself. Clary is feisty when she needs to be and I really liked her. I also liked the Shadowhunters we meet in City of Bones, Alec, Isabelle, and in particular and Mr. Jace Wayland who is more than a little bit swoon-worthy.

The book rattles along at such an incredible pace that you just don't want to stop reading and there are revelations that when I read them you could of knocked me over with a feather. Things I had absolutely no idea whatsoever were going to happen, nothing I've seen people speak about online and I for one have to say I am thankful to the fans of this book. They obviously respect the story so much and its impact on new readers that come to the series all the time, just like me, and wanting them to have the same sort of experience they had of reading the books.

I have to say that I cannot wait to throw myself headfirst back into the world of the Shadowhunters in the next few weeks when I read City of Ashes. I am determined to read the entire series over the next few months, in fact my copy of City of Heavenly Fire which closes the series, and is an absolute beast of a book size-wise, came only a few days ago and has me itching to race through the four books that stand in between City of Bones and itself. I cannot wait!