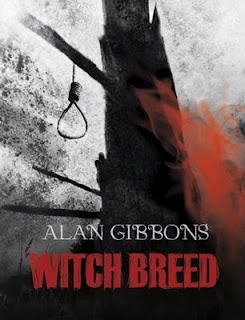 Written by: Alan Gibbons.
Published by: Orion Children's Books.
Format: Hardback.
Released: 1st July 2010.
Rating: 4/5.
Official synopsis: When Paul arrives in 17th century London, he expects to be thrown into a life or death struggle for the three gates that imprison the ancient King Lud. But the battle doesn't come. Instead, Paul roams alone, learning how to survive in a city where all the talk is of the savage civil war that rages beyond its ramparts. Somewhere underground, Lud is waiting in his crypt, preparing to rise again. War, fear and want are his tools. But Paul too has his own weapons and is gaining strength and losing inhibitions about using it. Meanwhile, beyond the city, innocent women are being killed for it is so easy to claim that they are witches. One woman - whether innocent or guilty - possesses the only power available that can help Paul in his quest."
Witch Breed is the fourth book in the Hell's Undeground series by Alan Gibbins, and a series of books I admit I hadn't seen before. I recieved Witch Breed to review thanks to the brilliant Nina Douglas at Orion, and was itrigued as soon as it came though my postbox. I set about catching up with the series, and borrowed the first 2 books from my friend, and the third from the library. Now caught up, I could read Witch Breed.
First off, wow. What a series. Horror in abundance. Terror, suspense. Demons! Everything you need to get boys reading! Perfect.
Witch Breed is my favourite book of the series so far. It's terrifying, exciting and un-putdownable. An incredible expose of the atrocities, the injustices, that took place in England's history, as many innocent women were tried and executed for the crime of being a Witch.
It's an effortless read. Fluid, the writing is perfect. Tension and scares from all sides. Half-masked demons and murders.
This book actually blew me away, and so I can't really say much about it. I seriously do not want to give a single thing away. This is a must-read. One of the strongest books I have read this year. Seriously guys, go and get a copy. I promise you will not regret it.
Buy from The Book Depositary
Posted by Ryan at 12:10