Angel by L. A. Weatherly [Review] 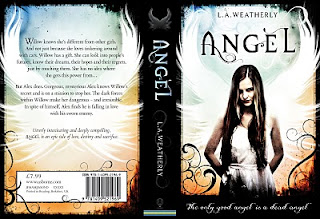 Written by: L. A. Weatherly.
Published by: Usborne.
Format: Paperback (ARC/UK Proof).
Released: 1st October 2010.
Rating: 5/5.
Official synopsis: "In a world where angels are beyond redemption, Alex thinks he's found one that might deserve mercy. Alex is a ruthless assassin - of angels. Forget everything you've heard about them before. Angels are not benign celestial creatures, but fierce stalkers whose irresistible force allows them to feed off humans, draining them of their vitality until there is barely anything left. As far as Alex is concerned, the only good angel is a dead angel...until he meets Willow. She may look like a normal teenager but Willow is no ordinary girl. Half-angel, half-human, Willow may hold the key to defeating the evil angels. But as the hunter and the hunted embark on an epic and dangerous journey and Willow learns the dark and terrifying secrets of her past, Alex finds himself drawn to Willow...with devastating consequences. Eoin Colfer reinvented the fairy, Stephanie Meyer reinvented the vampire, L.A. Weatherly reinvents the angel! This is a heart-pounding, knuckle-whitening, paranormal romance action-adventure for fans of the "Twilight" series. This is the first in a devastating new trilogy."
A few words will come to mind after you finish reading Angel by L. A. Weatherly. The first three are: "HOLY FREAKING MOLY". The next two are "Twilight who?"
This book blew me away. It's fresh, imaginative, hugely entertaining and highly addictive. Right from the prologue, you're drawn into this mysterious underworld, as angels are living amongst us, hidden in human form, sucking their life force in order to survive.
16 year old Willow isn't the popular girl at school. But she has a special ability to 'read' people.
And then there are the Angel Killers. On a mission to kill the evil parasites. In particular, there is young Alex who is a complex but highly interesting young fellow. As far as he's concerned, the only good angel, is dead angel.
When these two meet, the story explodes, and there is no let up. Action. Suspense.
A stunning read that will have you on a roller-coaster of a ride. From love to hate. Fear and anguish. Forbidden love to loathing. Once you start reading this book, you will not be able to stop. It has all the gusto that Twilight wishes it had. This book has the power to do for Angels what no one has really done before. It shows them in a new light - it makes them more interesting, more dangerous, and it toys with the idea that not all that we think to be good, actually is. It could be bad. And when things go bad, there are consequences.
This book is beautifully written and is leaving me achingly yearning for the next book in the trilogy, Angel Heat, out May 2011, and the third and final book, Angel Burn out October 2011. It's going to be a painful wait, but after Angel, I'm sure it's definitely going to be worth it! Top read for 2010!
Thank you to Anna Howorth at Usborne for sending me the copy! I am so grateful, and thank you for the opportunity! You guys should be proud to publish this book! And thank you to L. A. Weatherly for writing such an amazing book!
Pre-order from Amazon UK
Pre-order from The Book Depositary
Posted by Ryan at 16:42