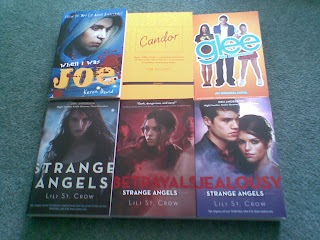 In My Mailbox idea from Kristi @ The Story Siren, and all links take you to Amazon UK.
First off, let me apologise for this epicly late IMP. I went to see Toy Story 3 yesterday (AMAZING! :D) and completely lost track of time. I meant to do this on Saturday and schedule it but I forgot! Well, I suppose it's better late than never!
I got some very cool books this week. One I've read and adored. And some I am very excited about. So without further ado, let In My Postbox commence! 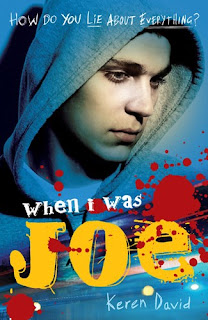 When I Was Joe by Keren David.
"When Ty witnesses a stabbing, his own life is in danger from the criminals he’s named, and he and his mum have to go into police protection. Ty has a new name, a new look and a cool new image – life as Joe is good, especially when he gets talent spotted as a potential athletics star, special training from an attractive local celebrity and a lot of female attention. But his mum can’t cope with her new life, and the gangsters will stop at nothing to flush them from hiding. Joe’s cracking under extreme pressure, and then he meets a girl with dark secrets of her own. This wonderfully gripping and intelligent novel depicts Ty/Joe's confused sense of identity in a moving and funny story that teenage boys and girls will identify with - a remarkable debut from a great new writing talent."
I ADORED this book and am so excited for the next book about Ty/Joe, Almost True, out in September! Thank you to Fabio at Frances Lincoln for my copy! 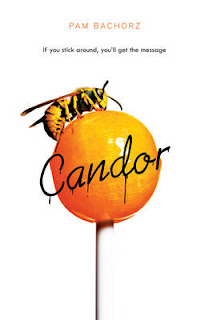 Candor by Pam Bachorz.
UK Proof/Advanced Reader's Copy.
"My name is Oscar and I am the perfect teenager. My girlfriend is the hottest girl in school. I get straight As. I am class president. But there is a terrible reason I am so perfect: the Messages. Oscar Banks lives in the pristine town of Candor. Son of the mayor, he is good-looking, smart and popular. And he knows something he's not supposed to - he knows about the brainwashing Messages embedded in the music that plays all over the town. But Oscar has found a way to burn counter-Messages that keep him real. Up to now, it's all worked perfectly. There's just one problem: Nia Silva, the newest Candor arrival. What will Oscar risk to keep the Nia he loves rather than watch her become a Candor automaton? Deeply chilling, "Candor" is a psychological thriller that will haunt readers with its vision of a world controlled by something worse than Big Brother."
This sounds so good. Looking forward to reading this! Than you to Jenny at Egmont for my copy! :D 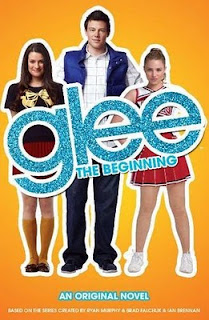 Glee: The Beginning by Sophia Lowell.
"CALLING ALL GLEEKS! Get more of your favourite characters in this official Glee prequel! All great performances deserve a warm-up! Enroll early at McKinley High to find out what went on before New Directions was even a glimmer in Mr Schuester’s eye. When did Rachel first decide Finn was more than just a jock? When did Puck and Quinn start their secret romance? And how did the fledgling Glee Club function without a fearless leader? Hint: It wasn’t exactly a perfect melody. Break out the gold stars and refill the slushies: it’s time to find out what happened to all your favourite characters before the show-mance began. These novels contain additional storylines to those featured in the hit TV show."
Gleeks! Looking forward to having a read of this. Although my sister has forbidden me from reading it yet. She's coming home off holiday today (Monday) and is demanding that she be allowed to read it first or I shall be in trouble! I don't fancy facing her wrath, so this will be reviewed in due course! :) Thank you to Sam at Headline for my copy!

Strange Angels by Lili St. Crow.
"Dru Anderson: Night Hunter. Knife Wielder. Heart Breaker. Dru can sense evil, which helps when she and her Dad are tracking down ghosts, suckers, wulfen, and the occasional reanimated corpse. It's a dangerous life, but it's the only one she knows. Then Dru's dad turns up dead and she suddenly finds herself in the middle of a deadly game where every move she makes could be her last. Dru is more special than she realizes - and whatever killed her dad could be coming for her next. Can Dru stay alive long enough to fall for one - or both - of the guys hungry for her affections? Find out in the heart-stopping first book in a thrilling series."

Betrayals: A Strange Angels Novel by Lili. St Crow.
"The second novel in the Strange Angels series picks up with Dru neatly tucked away in a Schola that's more like a prison than a secret training facility. Except for one tiny detail ...she's the only girl in the place and is totally surrounded by tons of cute boys. But a traitor in the Order wants Dru dead and she can't trust anyone except for Graves. Too bad he's being kept busy with a new crew of wulfen teens and doesn't have time for her. As she learns the truth about who she can and can't trust, Dru's only hope may be to save herself - although the one gift that makes her special is draining away, and she doesn't know how to get it back. Will Dru survive long enough to find out who is really after her? Or is she destined for the same fate as her murdered parents? Lili's characters come alive on the page in a way that's visually stunning and she creates the same terrific pace, danger and teen romance as in Strange Angels."

Jealousy: A Strange Angels Novel by Lili St. Crow.
"Dru has made it to Schola, the leading school where the vampire-fighting Order is based. There she is up against the capricious Anna, the only other female who shares her powers. Dru must unlock the mystery of who betrayed her mother, battle her intensifying feelings for both Graves and Christophe, and try to stay hidden from Sergej's deadly nosferat - bloodthirsty hunters who'll stop at nothing to destroy her."
Looking forward to reading these three books. They sound really good and I've read some of the reviews and they seem quite favourable! Thank you to Parul at Quercus for these!

Well there you go. That's what came through my postbox this week. What about you, what did you get? Hope everyone has a great week!
Posted by Ryan at 13:52