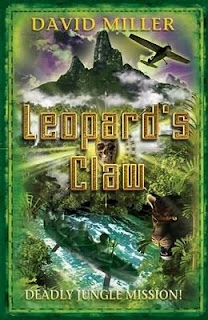 Written by: David Miller.
Published by: Oxford University Press.
Format: Paperback.
Released: 1st July 2010.
Rating: 5/5.
Official synopsis: "BETRAYED. ATTACKED. LOST. Life has returned to normal for Hanna, Ned and Jik after their adventures in the tempestuous Sulu Sea. But then Dad heads to Borneo to look for gold and everything goes horribly wrong. Dad is accused of murder, and Hanna, Ned and Jik know they must go into the jungle to prove his innocence. It is a race against time but the tropical forest is filled with predators - both animal and human. And what deadly secret waits in the heart of the jungle?"
You've got 28 days to save your dad from being executed for a crime he didn't commit: MURDER!
Leopard's Claw opens with a bang and it doesn't stop right till the very end. This is the third book in the series, following on from Shark Island and Sea Wolf, and there are no signs of it slowing down just yet! Ned and Hanna are in just as much danger as ever.
From the streets to the deep and deadly rain forest, Ned, Hanna and Jik begin to unravel the truth as they battle against deadly animals, evil spirits and something far, far more sinister. With suspense coming in from all angles, and a pace that doesn't let up even for a second, drawing you in, deeper and deeper, David Miller has created the best book in the series so far, the most exciting book so far!
A brilliant read with fluid writing, an effortless read. A breath-taking read. If you haven't read this series yet, you seriously need to! Do not let it pass by!
Thank you to the amazing Liz Scott for my copy! Very grateful. THANK YOU!!
Posted by Ryan at 13:53