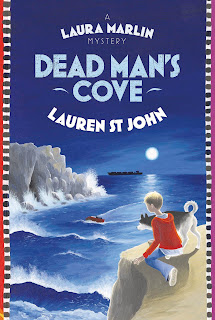 Written by: Lauren St John.
Published by: Orion Children's Books.
Format: Hardback.
Released: 5th August 2010.
Rating: 4.5/5.
Official synopsis: "When orphaned Laura Marlin moves from a children's home to live with her uncle in Cornwall, she longs for a life of excitement just like the characters in her favourite detective novels. A real life adventure is on hand as she is deposited at her uncle's spooky house . . . Why does her uncle, Calvin Redfern, forbid her to go to Dead Man's Cove? What's the truth about Tariq, the silent Indian boy who lives with the flamboyant Mukthars? Who is J? Who has left the message in a bottle for Laura to discover? Mysteries abound and who better to solve them than Laura Marlin, ace detective? Accompanied by her trusty companion, Skye, a three-legged husky, the dog she's always wanted, Laura's adventures begin."


11 year old Laura is an orphan. Her father, an American soldier, disappeared long before she was born, and her mother died during childbirth. All her life, Laura has lived at the Sylvan Meadow's Children Home. Always hoping and dreaming of finding a home where she can stay longer than half a day because she is fussy. And then finally, such a dream comes true. Her uncle, her mother's brother, is found, and agrees to take her in. She moves to Cornwall to live with her uncle and immediately falls in love with it.


Her uncle, Calvin Redfern is a very intriguing character. Whenever he's around, you get the sense that there's something hidden about him. - secrets.


Laura has always wanted to be a detective. Her idol being Matt Walker, a character in a series of books. And soon, mysteries begin to surround her in St Ives. What are the Mukthars hiding? Who is J? And what is her uncle hiding.


It's gripping, hugely entertaining and has something special about it - I just can't put my finger on it. Lauren St John has written a beauty with this one! My only criticism is that it wasn't longer. I was left yearning for more! Very much looking forward to the second book in the series, Kidnap In The Caribbean, due next year.


Thank you very much to the amazing Nina Douglas at Orion for sending me the copy! :D
Posted by Ryan at 13:41