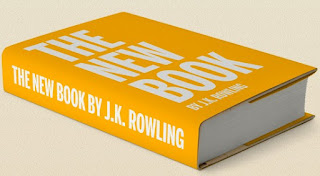 CUE MAD SCREAMING, RUNNING AROUND, A BIT OF FLAPPING AND MAYBE EVEN A LITTLE BIT OF (EXCITED) CRYING.

Yes! JK Rowling this week announced a brand new book due for publication later on this year!

Now, I wanted to post about this earlier in the week, when it was announced, but my laptop has been out of service this week (blooming gremlins). But in hindsight, it's a good thing. When it was first announced on Thursday, all we knew was that it was a book for adults, and that it was being published by Little Brown in both the UK and US... Ooh, and that it's going to be very different from Harry Potter. This had me excited, as I'll be honest, as much as I love Harry, I don't want a re-tread of his story. I want something completely new from Jo and the fact that it's so different is such a relief. 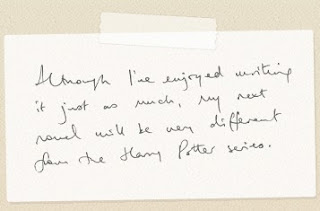 Rumours started to fly about when the book will actually be published. Guesses (and I suppose some calculation based on previous announcement to publication date timelines) ranged from around 6 months to late 2013! Ouch. That would be one heck of a wait.

Then, on Friday, Jo herself took to Twitter and confirmed that it'll be out later this year! YES! YES! So, we're getting a new JK Rowling book in the next 10 months! Argh! I for one am freaking excited and cannot wait!
Posted by Ryan at 10:20