News: Cover revealed for The Killables!

Hodder and Stoughton are gearing up to publish what promises to be a spectacular new book from Gemma Malley, next month! It's called The Killables and it sounds a little like this:

"Everyone accepted that people were different physically. But inside? Inside, they were different too. You just had to know how to tell, what to look for. Evil has been eradicated. The City has been established. And citizens may only enter after having the 'evil' part of their brain removed. They are labelled on the System according to how 'good' they are. If they show signs of the evil emerging, they are labelled a K ...But no one knows quite what that means. Only that they disappear, never to be seen again ..."

OOH! The proof currently sits on my to read pile, and I'm actually trying to decide what to read next and now the cover has been revealed, I think it's swaying my decision. How awesome does the cover look? 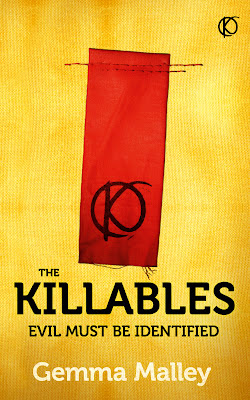