As far as I know, there isn't a UK publisher for this yet, but it sounds great, and it has a great cover! 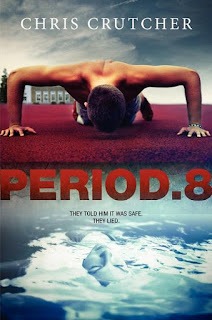 "In this full-length novel from Chris Crutcher, his first since the best-selling Deadline, the ultimate bully and the ultimate good guy tangle during Period 8.

Paul "the Bomb" Baum tells the truth. No matter what. It was something he learned at Sunday School. But telling the truth can cause problems, and not minor ones. And as Paulie discovers, finding the truth can be even more problematic. Period 8 is supposed to be that one period in high school where the truth can shine, a safe haven. Only what Paulie and Hannah (his ex-girlfriend, unfortunately) and his other classmates don't know is that the ultimate bully, the ultimate liar, is in their midst. Terrifying, thought-provoking, and original, this novel combines all the qualities of a great thriller with the controversy, ethics, and raw emotion of a classic Crutcher story."

I've been lucky enough to snag an eARC on Edelweiss, thanks to HaperCollins US and really looking forward to reading it!
Posted by Ryan at 00:00