So it's been a little while since I've done a Cover VS Cover post! The last one is in August... Earlier this year, I did one for Zom-B by Darren Shan, and in honour of the second book in the series, Zom-B Underground, which is out 3rd January, I thought it only fair that it got the same treatment... So off we go! 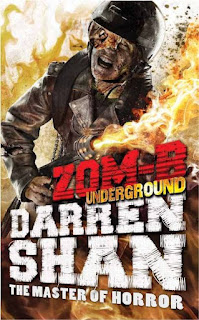 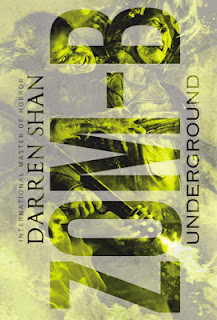 So, the UK cover, obviously it is eye-catching... and I suppose as it's the one I shall own I love it straight away. The colouring, the image, the FIRE! But then we have the US cover. I was kind of lukewarm to the US cover for Zom-B and it actually gave me the chills, too scary, but there is something I quite like about the US cover for Underground. Again, as with the UK cover, I like the colouring, the yellow verging on green, and I like the image. There does seem to be more going on here, the image seems to speak more action than its UK counterpart...

So this time, a rather rare occurrence, I think I have to go with the US cover! I adore the UK one, and of course it's the one that I'll have on my bookshelf, but there's something about the American artwork that just clinches it for me!

Which one do you prefer?