The Hit by Melvin Burgess [Review] 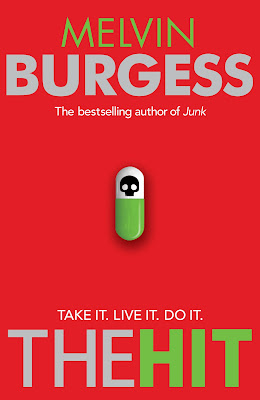 Official synopsis: "A new drug is out. Everyone is talking about it. Death. Take it, and you have one amazing week to live. It's the ultimate high. At the ultimate price Adam is tempted. Life is rubbish; his girlfriend's over him, his brother's gone. So what's he got to lose? Everything as it turns out. It's up to his girlfriend, Lizzie to show him."

The Hit is a thought provoking read that makes you question yourself indiscriminately whilst reading it. What would you do if you knew the little tablet you were holding in your hand would kill you in just a week if you swallowed it - but that one week would be the best, most exciting, most fun, most alive-feeling week of your life ever. Would it be worth it? One week on a high that is unlike anything else in the world?

Personally, I wouldn't think it was worth it. I'd rather plod along in life as I am thank you very much. But Adam, he doesn't see it that way. His life is dull - boring, monotonous and unchanging. He wants to be a footballer, but things aren't going well, and it looks like he's going to have to take up a job that he doesn't like in order to survive. He's got a great new girlfriend but it doesn't feel like enough. Then his brother dies. And his life is turned upside down. Things will never be the same - he'll never be able to chase his dreams as he'll have to help the family financially now that his brother is gone and his dad is unable to work through disability.

And then he takes it. Death. That little pill that both sorts all your problems out and yet gives birth to so many other problems.

I'll be honest, I'd never read any of Melvin's work before. I'd heard so many good things about it but I'd just never gotten around to it - and then when I heard The Hit was coming out, I thought that now would be the best time to do it. It sounded amazing - such a daring concept, a merciless drug that takes you no matter what - and I just knew that I would like it. But I was not prepared for the epic reality that would hit me once I started the book. It's gritty and so well written - I was sucked right in to the heart of the story and didn't want it to finish. It hurtles along at such a pace I was left breathless whilst reading some parts of it. I can't say any more because I simply don't want to spoil it but you just need to read the book! It's perfect.

It's proven to me that I need to read more of Melvin's work and that this was the perfect book to start on! I cannot recommend it enough.

My thanks to Chicken House for the review copy! You guys are awesome!