So I don't really know how I missed this, but yet again I am late to the party! Late last night, and I mean really late... like 3am late... I was browsing twitter in between reading and watching TV because I am an insomniac and who needs sleep anyway, right?! So, anyway, I was just reading and then I saw something that Elizabeth Richards had re-tweeted about a cover reveal for a book called Wings. Ooh... Might as well check it out, wonder who it's by... *clicks link*... *loads...* SHOOT! SHOOT! NO WAY! NO FREAKING WAY! It's Elizabeth's book. It's the finale of the Black City trilogy... Eeep... Compose yourself... And then I saw the picture of the cover and I was so excited. Because guys, it is beautiful. It's just so awesome, you need to see it for yourself... 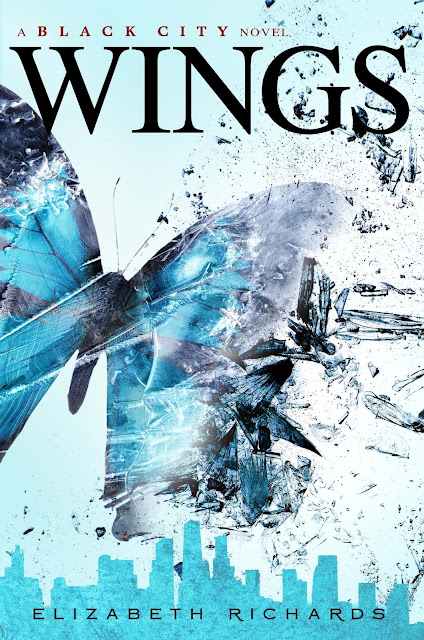 Just... Gah! The colours. The title. The butterfly. The shattered glass. It is so so beautiful and it fits along with the previous books, Black City and Phoenix and it's going to look so freaking amazing on my bookshelf next to them. I cannot wait to read it. It's out in 2014, which just reminded me, I really need to get my review of Phoenix up because it was a stunning read!

If you haven't already, check out Black City. It doesn't have a UK publisher at the moment, although why the hell not, I do not know... MADNESS I TELL YOU, MADNESS! But, you can buy it for your Kindle on Amazon UK or you can just import the beautiful physical copies in courtesy of the Book Depository, which is what I did! Black City really is amazing, please don't let the fact that it's about vampires deter you because it's so much more than that! And Ash is one sexy character for sure that will have you demanding to read on!