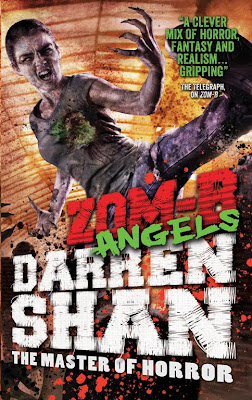 Official synopsis: "Where can you find shelter in a city of the damned? How can you build a new life if you're undead? Who can you trust in a world gone mad? B Smith has come to a crossroads..."

This is the fourth book in Darren Shan's Zom-B series, one that I am championing as much as I can because its Darren and zombies and its set in England and so much more, but unlike the first three books in the series, Angels is arguably a quiet affair, much unlike the rest of Shan's work.  But this book has a job to do, one Darren has talked about quite extensible. It's a book that is building the foundations for the rest of series as it answers some questions and at the same time opens up a whole other can or works that can see our characters going in several different directions over the course of the rest of the series.

I've said before how hard reviewing these books is getting because we're still in the stage where the overall story is still being laid out but enough is happening that it could be spoiled because of things that happen earlier on. Thanks Darren for making the books all twisty and turny.

The twist in this one though is a biggie. It reveals where the zombies originated, and I'll be honest I wasn't expecting it at all - but it makes complete and utter sense and it could prove very interesting. It's something most people know about and possibly learnt about in school and something one of my teachers spoke about a bit being a bit of a conspiracy theorist himself... I hope this doesn't happen in real life. Haha. It almost had me scared.

As ever the writing is tight and polished, but then you expect no less from Darren. He works so hard on his books and works on them for several years before they even see print. I'm still trying to decide what I think about B and I think this is something Darren wants. I find myself warming to her and then she does something and I want her decaying body to crumble and just disappear. She annoys, endears and also humours you in equal measure but sometimes the balance tips...

The next book, Zom- B Baby isn't out until September but I already foaming at the mouth to see what's going to happen next and after the tweet Darren sent me about the book I'm even more excited! Being it on.

My thanks to Scholastic and Schuster for my review copy, you guys rock!
Posted by Ryan at 00:00