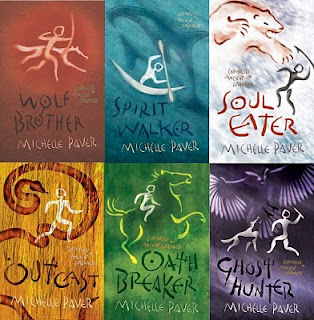 Now, I am a massive massive massive Michelle Paver fan. Her Chronicles Of Ancient Darknessbooks captivated me for 6 amazing years. The wait in-between books was murderous. They're just the sort of books that you crave for.
Set 6,000 years ago, in the Forest, in a world of clans named after the animals of the Forest, WOLF BROTHER was released in 2004. It's artwork was so different to anything I had ever seen. So vivid, stunning, and yet simple. The artist, John Fordham, has created 6 phenomenal cave painting covers for the entire series. Each one getting better than the last. It was the artwork that drew me to WOLF BROTHER all those years ago.
The series tells the tale of Torak. A fourteen summers old boy who's father is killed by a demon bear. Along his travels he befriends a wolf cub, aptly named Wolf.
The world in the books is a fascinating one. The Forest is completely made up. Although Michelle has said that it's European (around Scandinavia) just with the mountains moved, and the north moved to make it suit the story. Michelle researched brilliantly, going on trips all over the world to get a feeling for how the characters would feel in their settings. She even met a mother bear and her two cubs in a remote valley in Southern California.
Throught the series, Torak learns things about him that he never thought possible. Powers that the Clan Mages would die for. Powers that the dreaded Soul-Eaters want.
The Soul-Eaters are you classic villains with a twist. They are all people who should do good, the people who you should trust more than any other, Clan Mages. Instead they choose a world of demons, evil and sickness. They want to rule the Forest, and call it their own. And they are willing to do anything to achieve their goals. One of the Soul-Eaters, the Eagle-Owl Mage, Eostra is truly one of the most evil and terrifying characters I have come across. She is pure, un-adulterated evil. With an unhealthy obsession with the dead, it is plain to see why she is the last Soul-Eater standing when GHOST HUNTER, the sixth and final book in the series came around last Summer.
Michelle's writing is captivating. Completely mesmerising. She knows the world, and the characters in it, so well. Back to back action, some very chilling scenes throughout the series (there's one in GHOST HUNTER, involving Eostra and a corpse, believe me, it's not pretty).
I'm not going into too much detail here, because I really don't want to ruin these books for anyone. Michelle Paver is probably my favourite author out there. Yes, she pips JK Rowling (and JKR is a god to me!). Her books are consistently good, getting better every time. When reading them, you are transported back 6,000 years ago, back into the flickering torchlight of pre-history. The description is on target every time. The characters are believable, and interesting. The plot is fantastic. The twists and turns. Revelations that take you unawares (even on second and third readings).
I simply cannot express my love for these books enough. And having met Michelle twice she is also one of the nicest people I have ever met. She makes time to talk to you and I've met some authors who have a little chat but you can tell they kind of just want you to hurry up so they can get on and get home. But with Michelle you don't get that. She replies to all my letters.
Please, if you haven't read these books, please do. They are brilliant and should definitely not be missed. Also, they look very nice on the bookshelf. Nice and colourful... 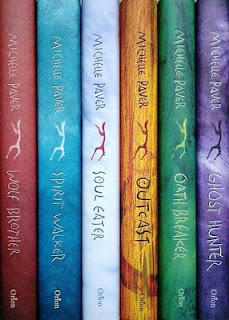