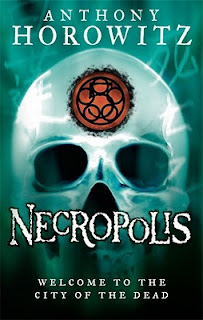 Written by: Anthony Horowitz.
Publisher: Walker Books.
Format: Hardback (now available as paperback).
Published: 31st October 2008.
Rating: 5/5.
Official synopsis: "Hong Kong has been taken over by the Old Ones and has become Necropolis, city of the dead. Once in, there is no way out...Evil has been unleashed on the world and only five children - with special powers - can save it. Matt and the other three desperately need to find Scar, the final gatekeeper, who has been trapped in Hong Kong, where puddles of water turn into puddles of blood, where ghosts, demons and hideous creatures stalk the streets. Matt has no choice but to follow her. Now, both imprisoned, their only hope of survival is to reach a secret door in the Man Ho temple. But even if Scar can find her psychic power, it may already be too late."
Necropolis is the fourth book in the utterly phenomenal Power of Five series. Many rave about Horowitz's Alex Rider books, and over look the Power of Five. This is just plain wrong wrong wrong!
For me, the Power of Five books are amoung my all time favourites. Absolutely stunning books. The first book, Raven's Gate, was published in 2005 and set a horrifying pace. A stand out scene has to be when a man is made to stab himself by an evil evil woman. Evil Star followed in 2006, with Nightrise following in 2007.
Necropolis is by far the most terrifying book in the series so far. It's the peniltimate book, and the evil is closer than ever before. The Old Ones have been banished before, but after escaping from the second gate in the Nazca desert, it it time for revenge. They have taken over Hong Kong, poisoning the air.
The race is on for them to find the five Gatekeepers before they meet. When the Gatekeepers meet, there will be no stopping them, and the Old Ones know that they will be destroyed. They will do anything to destroy the Gatekeepers so that they can wreak their havoc on the entire human race. Torturing and killing every living thing.
A terrifying read that froze me with fear, aptly released on Halloween. I cannot recommend these books enough. Horror. Fantasy. What more could anyone want?
And with the fifth and final book due for publication later this year, now is as perfect a time as any!
Buy from Amazon UK
Buy from Amazon US
Posted by Ryan at 22:11