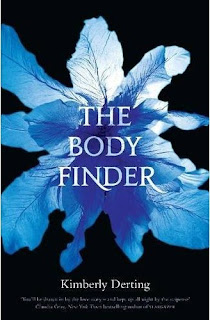 Written by: Kimberly Derting.
Published by: Headline.
Format: Paperback.
Released: 11th November 2010.
Rating: 4/5.
Official synopsis: "Violet Ambrose is grappling with two major issues: Jay Heaton and her morbid secret ability. While the sixteen-year-old is confused by her new feelings for her best friend, she is more disturbed by her "power" to sense dead bodies – or at least those that have been murdered. Since she was a little girl, she has felt the echoes the dead leave behind in the world...and the imprints that attach to their killers. Violet has never considered her strange talent to be a gift, but now that a serial killer is terrorizing her small town Violet realizes she might be the only person who can stop him. Despite his fierce protectiveness over her, Jay reluctantly agrees to help Violet find the murderer – and Violet is unnerved by her hope that Jay's intentions are much more than friendly. But even as she's falling in love, Violet is getting closer to discovering a killer...and becoming his prey herself."
I have to say, when I first got this book, I was kind of worried about whether or not I'd like it. I'm not really a big fan of romance paranormal books, and I've already been converted to Maggie Stiefvater and didn't know if it'd happen again. But The Body Finder proved to be a very very pleasant surprise.
I loved it. The story. The characters. All of it just appealed to me. From start to finish, I didn't once thing "this is naff". And as far as I am concerned that's a good book! I loved the plot as a whole. Violet being drawn to the murdered by, what she calls, echoes. This book is hugely clever and very very entertaining!
The writing is beautifully crafted and styled. It reads really nice and smooth. ReadingThe Body Finder kind of reminded me of watching a film. It was such an effortless yet brilliant read!
I cannot recommend it enough! You seriously need to read it! I'm sorry that there's really not much more to say! It's just too brilliant for words! I couldn't believe how much the book changed my mind after my initial thoughts!
(Also, I should say, that I adore the cover. It's so cool and stands out for sure!)
My thanks to Sam at Headline for my copy! :D
Posted by Ryan at 10:00