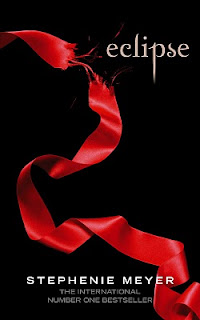 Written by: Stephenie Meyer.
Publisher: Atom.
Format: Paperback.
Released: 7th August 2007.
Rating: 4/5.
Official synopsis: "'Bella?' Edward's soft voice came from behind me. I turned to see him spring lightly up the porch steps, his hair windblown from running. He pulled me into his arms at once, and kissed me again. His kiss frightened me. There was too much tension, too strong an edge to the way his lips crushed mine - like he was afraid we had only so much time left to us. As Seattle is ravaged by a string of mysterious killings and a malicious vampire continues her quest for revenge, Bella once again finds herself surrounded by danger. In the midst of it all, she is forced to choose between her love for Edward and her friendship with Jacob - knowing that her decision has the potential to ignite the ageless struggle between vampire and werewolf. With her graduation approaching, Bella has one more decision to make: life or death. But which is which? Following the international bestsellers Twilight and New Moon, Eclipse is the much-anticipated third book in Stephenie Meyer's captivating saga of vampire romance."
I know it's late (very late, 1:12 as I write this!), and I really should be in bed, but I finished this about 20 minutes ago and raced straight through the first chapter of Breaking Dawn, and I wanted to get my thoughts down before I forgot.
Eclipse is by far my favourite of the three books I have read so far. I thought that Twilight was brilliant. A stunning debut that was incredibly captivating. I'm not normally a fan of romance novels, but the book was getting so much attention that I couldn't sit by and miss out. Plus I'm a big fan of all things Vampire. Glad that I didn't. But then there's New Moon which in my opinion is a bit dull. It's my least favourite of the three so far. I just didn't like it, to be honest. I found Bella far too whiny and miserable in the book. Yes, I get that she's a teenager, a girl and besotted with Edward, but I just thought it was a little far fetched. I don't agree with hitting women, but you just wanted to smack her and tell her to pull herself together!
So as you can imagine, I went into Eclipse with a little bit of trepidation, but I can say that any doubt I had was gone right from the beginning. It felt like Twilight all over again. I was captivated and I found it hard to put the book down, rather than finding it hard to pick it up. It's the same, catchy, adrenaline filled genius that first captured me and the millions of readers around the world.
And we finally got to see the big showdown with Victoria. Something that I'd been looking forward to since the ending of Twilight.
The only thing for me that let the book down, thus it not getting a 5/5 rating, is that in places, the dialogue didn't really run smooth. Everyone seemed to change in an instant. One moment there was fighting, then love, then fighting again. There wasn't really a definite line which sometimes meant I had to go back and read again. Otherwise, the book is considerably faultless. I cannot wait to read Breaking Dawn to see how it all ends! Expect a review when I finish it!
Now if you don't mind... SLEEP!
Posted by Ryan at 00:58