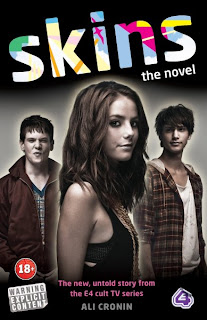 Written by: Ali Cronin.
Publisher: Hodder & Stoughton
Format: Paperback.
Released: 7th January 2010.
Rating: 4/5
Official synopsis: "Effy, Freddie, JJ, Cook, Naomi, Pandora, Thomas and Katie are all dealing with the aftermath of the events at the end of series 3. Effy has fled to Italy with her mum, where she tries to put her feelings for Freddie, and the guilt she feels for stealing him from Katie out of her mind. The perfect distraction comes in the form of sophisticated older man, Aldo...Naomi and Emily are struggling with spending time apart when Em goes to France with her parents and battles with her stubborn twin sister, Katie, Back in Bristol, Naomi pines for Emily while wondering about her future education, Thomas and Pandora are sweetly in love, and finding it difficult to consummate their feelings for each other. Freddy and Cook are engaged in a vigorous game of sexual one-upmanship with a frustrated JJ as referee...By the end of the summer, the gang will have resolved some issues and brought up some more."
Skins: The Novel is the first book to be released based on the popular E4/Channel 4 programme, Skins. Based in Bristol, the book takes off from Series 3 of the tv series, and tells the story of the summer that passes in-between Series 3, and Series 4 (currently airing on E4 on Thursday nights at 10pm).
The book was written by Ali Cronin, a freelance writer from the UK, and captures the characters brilliantly. It feels exactly like watching the programme. The characters sound right in your head. You can believe that it's them speaking. It seems to have come easy to Cronin. It doesn't feel like too much thinking has gone into the dialogue, because it matches the characters perfectly.
The only downfall of the book is that some scenes go far too quickly, taking a page or less.
I recommend this book very highly, although only for 18+. It does feature a fair bit of swearing, and there are a few sex scenes that aren't really appropriate for younger readers.
Buy from Amazon UK
Posted by Ryan at 15:42