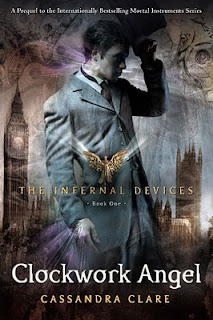 Official synopsis: "Magic is dangerous - but love is more dangerous still... When sixteen-year-old Tessa Gray arrives in England during the reign of Queen Victoria, something terrifying is waiting for her in London's Downworld, where vampires, warlocks and other supernatural folk stalk the gaslit streets. Friendless and hunted, Tessa seeks refuge with the Shadowhunters, a band of warriors dedicated to ridding the world of demons. Drawn ever deeper into their world, she finds herself fascinated by - and torn between - two best friends, and quickly realizes that love may be the most dangerous magic of all."
Clockwork Angel is the first book in The Infernal Devices trilogy by Cassandra Clare, which will serve as a prequel series to her award winning series, The Mortal Instruments. And it's the first thing written by Clare that I have read. And I have to say that it didn't disappoint at all!
The writing is absolutely fantastic. It's so smooth and fluid, it didn't even feel like reading. If anything, it felt like I was watching a movie! Such skill!
The plot is fantastic and as it's my first exposure to Clare's world of Shadowhunters, vampires and evil, it made a great impression on me.
The setting is fantastic. I love the use of Victorian London. It just feels perfect. The dingy streets, the descriptions, it's just perfect. I also like the time aspect of the story. I like that Tessa was horrified when Charlotte is wearing trousers (as any self respecting Victorian lady would be!) and when Sophie, a servant, talks back to Will. Both situations actually made me laugh.
To begin with, I wasn't very keen on Tessa. I liked the opening, I thought it was very engaging and it made you question why it was happening, it made you want to read on, but I wasn't instantly drawn to the character. But as the book progressed, I really started to like her as she came out of her shell more. There's definitely a lot of promise for the character she's going to develop into and I cannot wait to see that happen over the next 2 books.
The clockwork soldiers actually creeped me out. They were seriously scary. The idea of them - every time they popped up they reminded me of the Clockwork Droids from an episode of Doctor Who. Their mechanical ruthlessness.
This book would of gotten a 5 out of 5, but I found the earlier part of the book pretty slow going, and it took a little while for me to actually get into it. But once it picks up, it's a sprint till the very end. The ending of this book was fantastic and has definitely left me eager to read the next book in the trilogy, Clockwork Prince, out late next year! I shall also be getting copies of the 3 published Mortal Instruments books so far and devour them! Make sure you get this book. It's brilliant!
My thanks to Sean at Walker for my copy!
Posted by Ryan at 10:00